By Unknown Friday, February 25, 2011
In 1980 we had real videogames! They were training grounds of a young generation ready to defend the world against the most dangerous foes. We protected cities from ICBM attacks. We destroyed rogue asteroids in midflight. We staved off invaders from space. Not only did we save you from ghosts, we ate them in the process. Finally, Junior plumbers with extraordinary leaping ability rid us of giant apes wielding barrels.

Nothing, was more dangerous however than the dreaded Centipede with his cohorts; spider, flea and scorpion.

Naturally, the graphics were amazing. They used all the colors; yellow, magenta and cyan!

These videogames were for hard-core gamers. "Power ups" weren't in our vocabulary. You couldn't add another quarter for game time, you had to earn it.

The best of the best not only needed great hand-eye coordination, but also extraordinary bladder control, because no one had invented the pause button.

I was transported back in time when I discovered that the Atari website has several classic games including my all-time favorite, Centipede.

It's actually a pretty amazing throwback. The classic game is original, even including the "invisible mushroom bug".

Centipede was my favorite by default. It was the only game at our local Pizza Hut. It was a tabletop version design for people to be able to sit while they waited for pizza pickup. Dominos hadn't invented 30 minute delivery, and you couldn't call ahead from your car, so stopping by Pizza Hut for takeout meant the least a 25 minute wait.  Being a wheelchair user, I couldn't use standup arcade games.

I think I was about 12 when I asked my mom for a Pizza Hut birthday party and a roll of quarters. My mom gave me two dollars saying "We aren't wasting an entire roll of quarters on videogames. That would fill the gas tank in your dad's Pinto." I secretly wished she would be attacked by a spider.

It's a browser-based flash game. It uses your mouse as the controller and left click button to fire. I use a Kensington Turbo mouse trackball, so it's about as close to the original controls as possible. Centipede was one of the few games that used a trackball rather than a joystick.

The sound is awesome and authentic. Pay close attention and you realize that Centipede used several sounds that were reused in later arcade games, specifically Ms. Pac-Man.

Naturally the graphics are awesome, using all eight bits! Centipede was high-tech at the time using six colors instead of only three. Few games had red or blue, and who doesn't love neon lime green.

Finally, the most coordination of all doesn't come into play until the end, when you have to manipulate the trackball to enter your initials.

Only one real pitfall. I guess they tried to be true to the game, because every time you close your browser, the high scores disappear. It's kind of like the lame arcade that unplugged their machines at night. The good arcades kept them running permanently, as long as the power didn't go out.

Here's a screenshot of my high scores of the day. Yes, I kept track of my top 20. They are below. Lame, I know, but let's face it I'm playing a video game 30 years after it was invented. I'm not known for being cool. 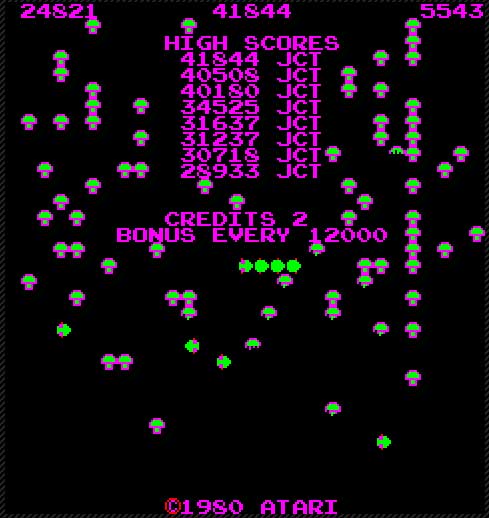 If you are interested, take a screenshot of your high scores and e-mail it to Sunfyre@Gmail.com and I'll add you to the list. Yes, it would be pretty easy to fake some screenshots, but don't be a douche. Anyhow, take a screen cap of your scores, and e-mail them to me with the date. 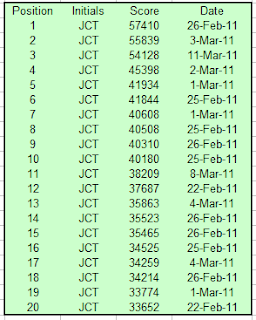 Speaking of scores, every machine had somebody who used "USA" as their initials on the high score list. And we all had that one buddy who claimed it was his. You didn't believe him, but you couldn't call him on it or he would say, "What are you, a Commie?" After defending cities on Missile Command from nuclear attack, you definitely aren't a Commie.

If you were born after 1974, you probably understand little to none of this post. You are a child.