Little Johnny and his family were having Sunday dinner at his Grandmother's house. Everyone was seated around the table as the food was being served.

When Little Johnny received his plate, he started eating right away.

"Johnny! Please wait until we say our prayer." said his mother.

"Of course, you do "his mother insisted." We always say a prayer before eating at our house."

"That's at our house." Johnny explained. "But this is Grandma's house and she knows how to cook."


The Magician and the Parrot 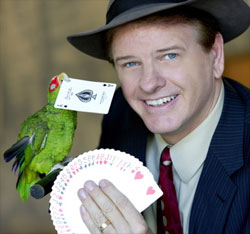 A magician worked on a cruise ship. The audience was different each week so the magician did the same tricks over and over again.

There was only one problem: The captain's parrot saw the shows each week and began to understand how the Magician did every trick.

Once he understood, he started shouting in the middle of the show, "Look, it's not the same hat!" or, "Look, he's hiding the flowers under the table!" Or "Hey, why are all the cards the ace of spades?"

The magician was furious but couldn't do anything. It was, after all, the Captain's' parrot. Then they encountered a severely stormy night on the Pacific. Unfortunately, the ship sank, drowning almost all who were on board.

The magician luckily found himself on a piece of wood floating in the middle of the sea. As fate would have it he shared the piece of wood with the parrot. They stared at each other with hatred, but did not utter a word.

This went on for a day... And then 2 days, and then 3 days. Finally on the 4th day, the parrot could not hold back any longer and said.

Ever since I was a child, I've always had a fear of someone under my bed at night. So I went to a shrink and told him, 'I've got problems. Every time I go to bed I think there's somebody underit. I'm scared. I think I'm going crazy.' .

'Just put yourself in my hands for one year,' said the shrink. 'Come talk to me three times a week and we should be able to get rid of those fears.'

Six months later the doctor met me on the street. 'Why didn't you come to see me about those fears you were having?' he asked. .

"Well, Eighty bucks a visit three times a week for a year is an awful lot of money! A bartender cured me for $10. I was so happy to have saved all that money that I went and bought me a new pickup!' .

Golfers Are Such Warm People

A husband and wife are on the 9th green when suddenly she collapses from a heart attack! "Help me dear," she groans to her husband. .

The husband calls 911 on his cell phone, talks for a few minutes, and picks up his putter and lines up his putt. His wife raises her head off the green and stares at him. "I'm dying here and you're putting?" .

"Don't worry dear," says the husband calmly, "they found a doctor on the second hole and he's coming to help you." .

"Well, how long will it take for him to get here?" she asks feebly. .

"No time at all," says her husband. "Everybody's already agreed to let him play through."