Clem responded, "Well, I'll tell you what happened. I had just loaded my favorite mule, Bessie, into the -"

"I didn't ask for any details", the lawyer interrupted. "Just answer the question. Did you not say, at the scene of the accident, 'I'm fine'?"

Clem said, "Well, I had just got Bessie into the trailer and I was driving down the road -."

The lawyer interrupted again and said, "Your Honor, I am trying to establish the fact that, at the scene of the accident, this man told the investigating Highway Patrolman that he was just fine. Now several weeks after the accident he is trying to sue my client. I believe he is a fraud. Please tell him to simply answer the question."

By this time, the judge had become interested in Clem's answer and said to the lawyer, "I'd like to hear what he has to say about his favorite mule, Bessie."

Clem thanked the Judge and proceeded. "Well, as I was saying, I had just loaded Bessie, my favorite mule, into the trailer and was driving her down the highway when this huge semi-truck and trailer ran a stop sign and smacked my truck right in the side. I was thrown into one ditch and Bessie vas thrown into the other ditch. I was hurting real bad and didn't want to move.

However, I could hear Bessie moaning and groaning. I knew she was in terrible shape too, just by her groans! Shortly after the accident the Highway Patrolman, he came on to the scene.

He could hear Bessie moaning and groaning so he went over to her. After he looked at her and saw her fatal condition he took out his gun and shot her right between the eyes

Then the Patrolman, he come across the road, gun still smoking, looked at me and asked, 'How are you feeling?" 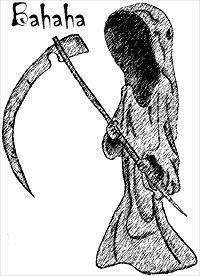 A very old man lay dying in his bed. He suddenly smelled the aroma of his favorite chocolate chip cookie wafting up the stairs.

He gathered his remaining strength and lifted himself from the bed. Leaning against the wall, he slowly made his way out of the bedroom, and with even greater effort forced himself down the stairs, gripping the railing with both hands. With labored breath, he leaned against the door frame, gazing into the kitchen.

Were it not for death's agony, he would have thought himself already in heaven. There, spread out on newspapers on the kitchen table was literally hundreds of his favorite chocolate chip cookies. Was it heaven? Or was it one final act of heroic love from his devoted wife, seeing to it that he left this world a happy man?

Mustering one great final effort, he threw himself toward the table. The aged and withered hand, shaking, made its way to a cookie at the edge of the table.

He was suddenly smacked on his hand with a spatula by his wife. "Stay out of those," she said. "They're for the funeral."

A state trooper stops an elderly woman for speeding. He asked her for her driver's license and registration. When she removed it from her wallet he noticed she had a Concealed Weapon Permit.


"Ma'am, are you in possession of a weapon at this time?" The officer asked.

She gestured toward the glove box and stated she had a ".45 semi-auto" in it.

As part of protocol the officer asked, "Are there any other firearms in the car?"

She opened her center console to reveal a 9 mm Glock.

Surprised, he hesitantly asked, "Are there any more weapons in your vehicle?".

She also admitted that she carries a .38 Special in her handbag.

All of her weapons and permits checked out, so the officer wrote the ticket for speeding, and was about to send her on her way.

She looked the trooper straight in the eye and said, "Not a F@CKIN' thing!"