Later today I'm planning on publishing the following article in the newsletter I sent for my day job, editor of Private Duty Today, an online business journal serving CEOs of home health agencies. 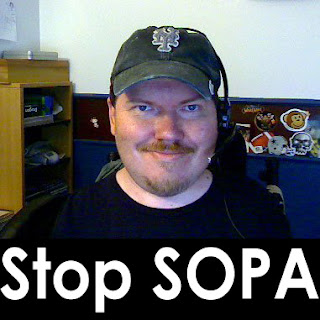 Because of that, our official policy is to inform readers about the impact of legislation and its lawmakers on our businesses, but not spout opinion. We try to provide insight, but not influence.

However, I'm going to make an exception today. There are two bills about to go to legislative debate, one in the House and one in the Senate. While these two bills have broad bipartisan support, they have virtually no support in the eyes of the American public. OpenCongress.org which tracks users opinions on upcoming and past legislation, shows the bill at 98% opposed.

The bills are House bill HR 3261, Stop Online Piracy Act (SOPA) and Senate Bill S. 968, Protect IP Act (PIPA). I believe these bills are dangerous, and a legitimate threat to our businesses.

The bills are nearly identical. Here is a quick bullet list of the provisions.


Okay, so now you're saying to yourself, "But Jason, this has nothing to do with me or my business."

I wish that were the case. In fact, it impacts every American. Here's how, and why.

Prior to our last election, organizations such as Comcast, Verizon, and other telecommunications providers, in cooperation with the entertainment industry pressed for a bill that would allow them to choose what websites travel over their wires. This would allow companies to charge websites for access to their subscribers. It would essentially create a cable TV version of the Internet. A movement called Net Neutrality grew and the bills were shut down. The American people wanted the ability to access the entire Internet regardless of which service provider wired their homes.

In this election cycle the content providers funded election campaigns on both sides of the aisle heavily. They spent a total of $94 million on congressional campaigns for currently sitting members of Congress. This number doesn't include money spent on Senate campaigns. This also doesn't include the money poured into campaign coffers of candidates who failed to get elected. The real money spent could be double.

The SOPA and PIPA bills are how the entertainment industry expects to recoup those "donations".

There are three major problems with these bills that are significant. The third one will directly influence your business.

First, the laws won't work. Unfortunately, piracy is a multibillion-dollar industry, and electronic pirates understand the Internet better than any other group.

Second, potential for abuse is high. There are lots of scenarios where content creators would desire to shut down a website. Here are a couple potential examples of abuse.


This bill contains no provisions whatsoever for due process. Any organization that has persuasive powers with a single judge wields great power over the Internet. The real threat for abuse lies with the entertainment industry who is ensconced in politics.

Let's assume the law does work. Let's even say that the good people of America choose never to abuse the law. There is a third reason, and this is most important to you, why this is a bad piece of legislation.

Responsibility is placed at the domain level. Additionally, the law applies not only to the originators of pirated content, but additionally to support websites such as blog platforms, PayPal and other commerce venues, social networks and social bookmarks. Because of this responsibility, most major websites will have to make significant policy changes to prevent violating the US law. It's these policy changes that will affect your business. Here are some examples.

It will become more difficult and more expensive to market any services or products online!

I've created a long list of very specific examples of how your favorite websites will be directly effected by this law. You can read it on my personal blog.

The entertainment industry including all major television networks, major film studios, record labels, book publishers and sports leagues all support this bill. They've made claims of losing money to piracy for more than three decades, starting in the days of recordable cassette tapes.

Here are the facts: 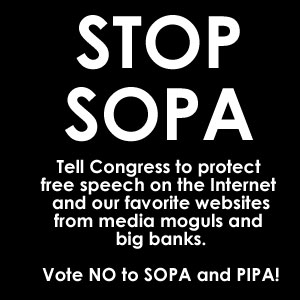 I urge you to please contact the two senators in your state and your local representative in Congress. Tell them three things:


Finally, make sure to tell your Senators and members of Congress that you are a voter. Tell them your party affiliation, because they need to recognize that members of their own party are against this bill. Tell them that you will vote against any member of Congress or the Senate that votes in favor of either bill.

There are catchphrases being thrown around by legislators. Here's what they may say, and the facts.


Members of Congress and the Senate need to realize that lobbyists and donors certainly have influence in legislation, however Americans are not willing to stand for violations of basic freedoms.

Today you may have noticed Google, Wikipedia, WordPress, OpenCongress and many other websites have staged additional protests.

These bills have a significant chance of being passed because of bipartisan support. Additionally, most Americans are unenlightened when it comes to the impact. The only way we will be able to convince our legislature to do the right thing is to make it clear that their jobs depend on supporting their constituency, not their donors.

Obviously, I have strong opinions about the subject. I invite you to do your own research, and formulate your own opinions. If anything above doesn't make sense, or is inaccurate, I invite you to place your comments below, completely uncensored! I am in favor of healthy debate.