Two guys, one middle age, one young are pushing their carts around Walt-Mart when they collide.

The middle age guy says to the young guy, 'Sorry about that. I'm looking for my wife, and I guess I wasn't paying attention to where I was going.

The young guy says, 'That's OK, it's a coincidence. I'm looking for my wife, too. I can't find her and I'm getting a little desperate.'

The middle age guy says, 'Well, maybe I can help you find her. What does she look like?'

The young guy says, 'Well, she is 27 yrs old, tall, with red hair, blue eyes, is buxom wearing no bra, long legs, and is wearing short shorts. What does your wife look like?'
To which the middle age guy says, 'Doesn't matter, --- let's look for yours.'

A married couple had been out shopping at the mall for most of the afternoon.

Suddenly, the wife realized that her husband had disappeared. The somewhat irate spouse called her mate's cell phone and demanded: "Where the heck are you?"

Husband: "Darling, you remember that Jewelry Shop where you saw the diamond necklace and totally fell in love with it and I didn't have money that time and said, 'Baby, it'll be yours one day'?"

Wife, with a smile, blushing: "Yes I remember that, my love." 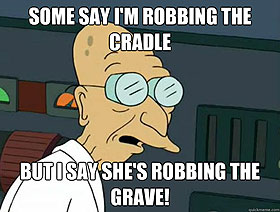 Husband: "Well, I'm in the Pub next to that shop."

Since her new husband is so old, Jenny decides that after their wedding she and Roger should have separate bedrooms, because she is concerned that her new but aged husband may over-exert himself if they spend the entire night together.

After the wedding festivities Jenny prepares herself for bed and the expected knock on the door.

Sure enough the knock comes, the door opens and there is Roger, her 85 year old groom, ready for action. They unite as one.

All goes well, Roger takes leave of his bride, and she prepares to go to sleep.

After a few minutes, Jenny hears another knock on her bedroom door, and it's Roger.

When the newlyweds are done, Roger kisses his bride, bids her a fond good night and leaves.

She is set to go to sleep again, but, aha, you guessed it - Roger is back again, rapping on the door and is as fresh as a 25-year-old, ready for more 'action'.

And, once more they enjoy each other.

But as Roger gets set to leave again, his young bride says to him, 'I am thoroughly impressed that at your age you can perform so well and so often. I have been with guys less than a third of your age who were only good once. You are truly a great lover, Roger.'

Roger, somewhat embarrassed, turns to Jenny and says: 'You mean I was here already?'

The moral of the story: Don't be afraid of getting old, memory loss has its advantages.