The Origins of Groundhog Day 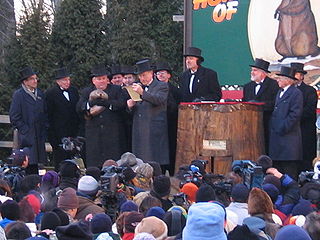 Groundhog Day is celebrated tomorrow, February 2, and the United States and Canada. The most notable groundhog is from Punxsutawney Pennsylvania, aptly named Punxsutawney Phil. They've been celebrating Groundhog Day each year since 1886 and have attracted as many as 40,000 visitors.

But you may be wondering how Groundhog Day got started.

The truth is we don't know. Groundhog Day or Candlemas Day was celebrated by the Pennsylvania Germans in southeastern and central Pennsylvania dating back to the 1700s.

The first known reference was dated February 4, 1841 by a Berks County storekeeper:


Last Tuesday, the 2nd, was Candlemas day, the day on which, according to the Germans, the Groundhog peeps out of his winter quarters and if he sees his shadow he pops back for another six weeks nap, but if the day be cloudy he remains out, as the weather is to be moderate.

Another early reference comes from an early English poem that speaks of Candlemas Day, that speaks of clouds and rain indicating an early spring, but makes no mention of a groundhog.

In a third theory, Groundhog Day could be as much as 1000 years old. The modern calendar has the first day of spring on March 20 or 21st, approximately 7 weeks after Groundhog Day. However, the Julian calendar showed the spring equinox on March 16, exactly 6 weeks after February 2. It's possible that predicting spring (a critical time in agricultural society) became a contentious argument. Perhaps a groundhog or a hedgehog was agreed upon as an arbiter. Early cultures often recognized the instincts of animals as superior to their own.

So why Punxsutawney Phil? Frankly, it was good marketing. A little tiny town in Western Pennsylvania wasn't going to attract visitors very often, and chose this unusual celebration to develop a strong tourism business.

But Phil isn't the only groundhog! There are dozens across the US and Canada. Wikipedia has a ridiculous list if you're interested, but here are the names of a few.

French Creek Freddie is from West Virginia. Tumbleweed is from Illinois. Balzac Billy is from Alberta Canada. There is Chuckles in Connecticut and Poor Richard from York, Pennsylvania. Mountain Maryland Murray from, well, Maryland. Buckeye Chuck from Ohio. Queen Charlotte of North Carolina. Even New York City has Staten Island Chuck.

Well, now you know more than you ever expected to know about Groundhog Day.