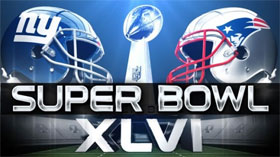 My prediction for the Super Bowl is based more on like/dislike than science. I've just never been a New England Patriots fan. I'm not a huge Giants fan either, primarily because they are in the same division as the Cowboys, however since the Cowboys are long gone I'm going to take the Giants.

The New York Giants will win the Super Bowl, because they have been able to put together at crunch time this whole season. They started out injured, and improved every week. When they finally beat the Cowboys on the last game of the season, they looked like a world-class football team. At that time I said they could go all the way.

Eli Manning is as good a quarterback as any in the league, including Tom Brady. The difference between Manning and Brady this year is their receiving corps. Tom Brady has a bunch of average receivers, and spreads the ball around well. Eli Manning has amazing receivers. Three of them are capable of going the distance on any given play. Because of that, I think they will have a strong running offense. 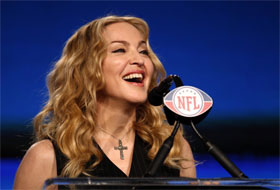 In a shoot out, I think Brady has the advantage, however I think the Giants are capable of controlling the tempo. If they can hold the ball more than 30 minutes, they will win.

Fumbles are the dealbreaker. They are even worse than interceptions, because with Brady and Manning interceptions are usually well downfield. Fumbles, however, could completely change the game.

If the Giants lose it will be because they dropped the ball, and failed to pick it up again, literally.

For those of you contemplating wagers, Giants over Patriots, 28-24.

With that said, I never put money on the games. I'm pretty good at predicting winners when Ben Franklin isn't involved.

Last prediction, Madonna's 50-year-old boobs will stay inside her wardrobe.

Credits: The term Super Bowl, the Lombardi trophy, and its logos are property of the NFL. Helmet designs are copyright of their respective teams. Madonna photo courtesy of Reuters/Jeff Haynes.