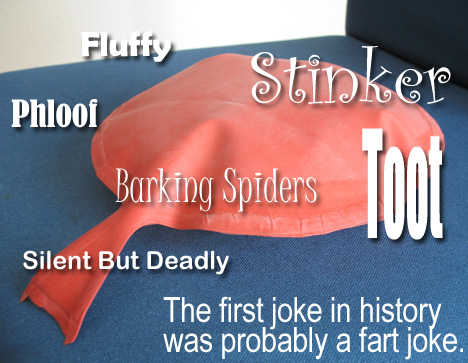 My children each received a $5.00 gift card to Dollar General for Valentine's Day. This may seem like a strange gift, but when your gross income is only $6.00 per week, it can be a favorite store.

Last night, my wife and I took the children to Dollar General in search of treasures.

My son found a Whoopee Cushion and my daughter found a fart machine, which can make six equally disgusting noises at the touch of a button. The novelty wore off before we left the store, so they opted for other purchases, but something occurred to me on the drive home....

... There is an entire industry, perhaps employing hundreds of people, in the manufacturing and distribution of devices that make flatulence sounds. What an awesome niche!

Somewhere there are little first graders who bring Dad into work on Career Day and he tells the children that he engineers whoopee cushions. Everyone likes it except the little girl whose dad is a firefighter, because she no longer has the coolest dad.

The Whoopee cushion was invented in 1920 by JEM rubber Co. of Toronto Canada. For the past 92 years the desire of nine-year-olds (and more than a few adult males) to make flatulence sounds artificially has supported manufacturer, distribution, and, yes, even technological advancement of the device.