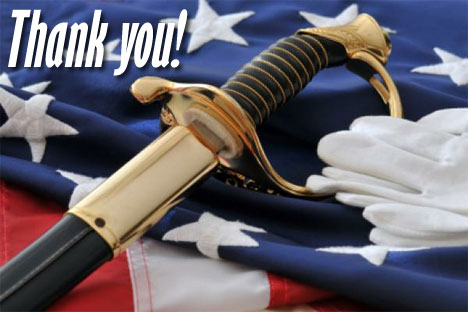 While we all enjoy a day off work, picnics and cookouts, take a moment to pause this Memorial Day to say a silent thank you to those who have given their blood to provide the freedom we enjoy.

It's easy to remember wars in the Gulf, and argue that they are about oil and profits. The truth is that, whether right or wrong, energy does influence our freedom.

Before that we fought in Vietnam and Korea to slow the spread of communism and dictatorial regime. Today very little of the world inhibits the freedom of other people. Even China has become part of the world economy, and while imperfect, freedom has seeped in.

The European wars united the world against tyranny. Our worst war, World War II, create eternal alliances among the countries who value freedom.

The Declaration of Independence touted freedom, but until the Civil War it didn't even exist in our home country. In the war between the states created America as we know it today, one united country that values human existence. It would take us another hundred years, but eventually we have created one of the few countries where anyone can thrive.

Our first America war wasn't fought by soldiers and armies. It was fought by farmers, silversmiths, carpenters and longshoremen. The only commonality was the desire for independence, freedom, and self-determination.

I firmly believe we live in the greatest country in the history of the world. It's imperfect. There is constant room for improvement. Many take the freedom for granted. However, no one doubts that we have one true freedom, which is the freedom of endless possibilities.

For this freedom I thank the men and women who have died in its name.