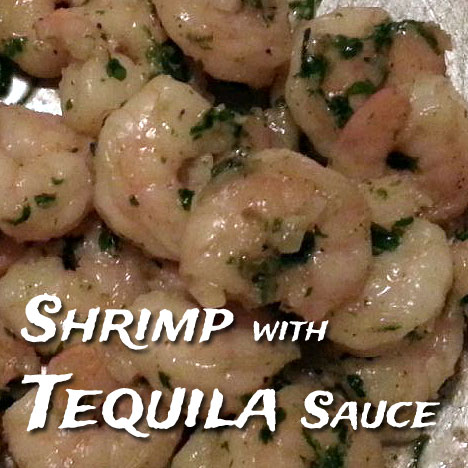 Last night my kitchen creation was shrimp in tequila sauce, or perhaps I should call it "camarones con tequila" in honor of the nation that invented the awesome, yet evil concoction known as tequila.

Don't worry, for those of you who have had bad experiences with tequila, the alcohol burns off while cooking, leaving only the flavor. 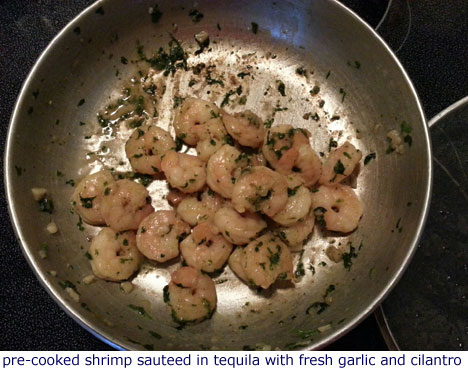 I started with small pre-cooked shrimp simply because I knew I was going to be able to cook it on grocery night, and I'm a little careful about keeping fresh shrimp more than a day or two.

The recipe calls for unsalted butter, but you could probably use olive oil. Start by sauteing the garlic. Normally I pile on the garlic, but I stuck to the recipe this time. I'm glad I did. It really brought out the cilantro.

Get the garlic just slightly brown, 30 seconds or so, then add your shrimp and cook it a couple more minutes.

Add the cilantro and tequila, and stir it on high heat until the alcohol burns away. This only takes about three more minutes. Add salt and pepper to taste. 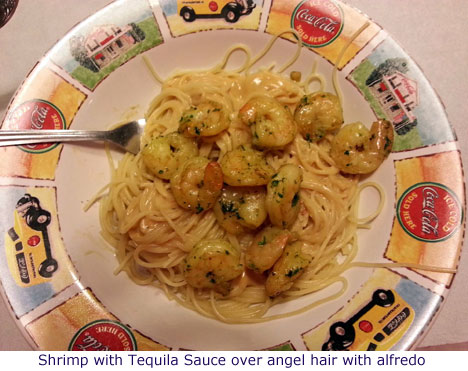 I served it over angel hair pasta with a little alfredo from a jar.

(By the way, I was making it for two, so I chopped the recipe down by 2/3. Normally it'll serve about six, or four if they love shrimp.)

Good flavor and super quick and easy. You could serve it over pasta with a little olive oil or marinara sauce. You could also trade tequila for a light dry wine that won't over power the cilantro.