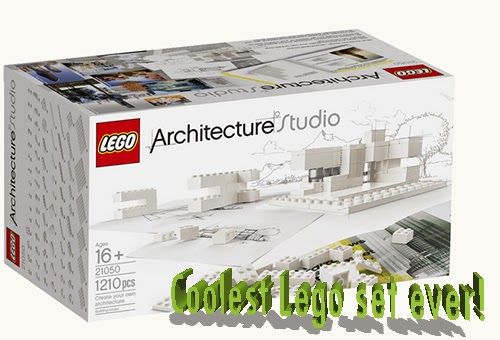 is 1200+ pieces of Lego awesomeness. It's designed with adult Lego builders in mind, particularly those who like free-form building rather than detailed instructions.

I grew up with classic Lego sets.  We didn't have the movie themed sets.  We relied on imagination. Like most of you, I never outgrew my love for Legos. My wife, who grew up back when they were still considered "toys for boys", never played with them. She had difficulty understanding why I wanted to purchase two of every set when I started getting them for my kids.

Actually, that's not completely true. The only set of Legos I still have is the Ferrari Formula One Lego Set

, which combines two of my favorite passions.

Now, if I could just convince them to create a Bacon Lego set, I could die happy.

Anyhow, we all know Legos are cool; so what makes this the coolest Lego set ever?

This set is entirely white with lots of unique pieces specific for creating architectural masterpieces. If you have your gold iPhone, IKEA furniture and live in a hipster loft in New York city, you may be colder than this set but not much.

Additionally, well it comes with a design guide, this set isn't designed to build anything in particular. In other words… You must possess imagination. If you don't, I recommend that you get out your Harry Potter set and build yourself a Dumbledore.

which, requires you not only to be geeky, but you also need to be unemployed to build it in less than a year. Don't worry, however, because you can shoot a time lapse video and put it on YouTube. Now you're not unemployed, you're a filmmaker.

Anyhow if you have architectural skills, design skills or at least imagination, you can get this set for $150 with free shipping. If you use my links, I'll even earn a tiny commission.