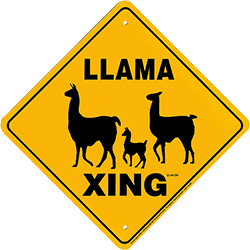 To see a llama in New England may seem like one lost mammal. Llamas in Connecticut is the kind of thing one sees and is inspired to write a book about. But not the llama I'm referring to. "Pete", as my girlfriend now calls him, is a llama spotted in the back of a blue pickup truck on I-84 Westbound, just above Hartford.

He was sitting, facing the rear in his roomy chickenwire cage. He sat chomping on his llama food and sipping on a coke. Pete looked at me with the exact look I was looking his way with. Neither of us were really shocked to see each other. We both felt as if it was our right to be where we were and the other person, llama, was the one out of place.

Pete looked so normal where he was that I didn't think it odd at all except that I've never in my life seen a llama on the interstate.

Curious, I asked my girlfriend how she knew Pete was a male. "Well, don't you think Pete is a pretty dumb name for a girl?" She said matter-of-factually. Ask a stupid question...

We drove for 50 or 100 miles before it dawned on me how odd of an occurrence this was. Then I thought it was bizarre in a normal enough way that no one else would even write a book about it if i didn't. It will never be a classic like "The Connecticut Llama in King Arthur's Court" but at least I put the story of Jason and Pete the Llama on paper.