By Unknown Wednesday, December 18, 2013
My kids leave their shoes everywhere. If there has been a kid in that room in the past six months, chances are there is a pair of shoes in the middle of the floor for no reason whatsoever.

My daughter is in much better. Hair ties and headbands multiply faster than the rabbit patch next to the Viagra factory. She dresses in layers, and leaves a path of discarded clothing and her wake.

And did I mention this shoes? Between the two of them they have more shoes than most villages in Africa.

So this got me thinking, we've tried all the standard techniques to encourage the kids to tidy up after themselves and put things away.


But none of these techniques seem to work. In the past, I've used bribery but I already bought the shoes once, and I didn't want to reward them for something they should be doing already.

On a more serious note, the clutter was becoming a problem. I want to find a solution that's was proportional and logical consequence of the offense.

I love "bankers" boxes. These heavy-duty boxes with lids have built-in handles, and they can hold the bunch of stuff. One Saturday morning I wandered through my house carrying one of these boxes. Every time I saw something out of place, it went into the box.

I learned two things that morning. First, one trip netted two boxes full of random trinkets including many individual shoes. Secondly, I learned that my kids aren't the only culprit. I found a surprising amount of clutter deposited by my wife and myself. This tells me that the first issue was that we hadn't bothered to set a good example to our kids. 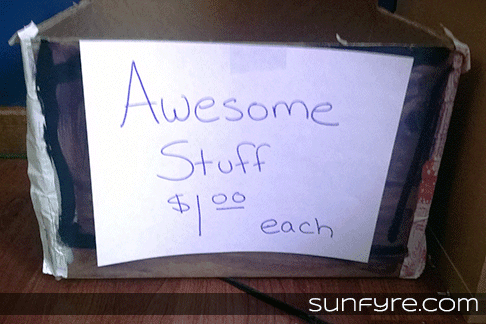 Now, in my office with two boxes full of treasures, I called my kids to explain the problem. First, I taped a sign to the boxes that said "Awesome Stuff $1.00 Each."

They look through the box and said, almost in perfect unison, "Hey, that's my stuff."

Then I told them that today we were having a one day only sale. Everything in these boxes was free.

"However, starting tomorrow," I said "whenever I find random things laying around, I'm tossing it in the box. You'll be able to buy back your items for one dollar each."

To which my son, who seems to have an answer for everything, said, "I don't care, I'll just buy it when I need it later."

Not to be outdone, I told them that each month anything remaining in the box was going to be sold, given away, donated or trashed.

Sure enough, the first week, I had quite a collection. On allowance day (they each earn $7.00 weekly) I simply returned seven items each that were in the box. General grumbling ensued.

By week number two, the problem was almost alleviated and by the third week, the box was retired because it was the only piece of clutter out of place.

They are still kids. They still leave things lying around, but, overall there's been a big improvement.