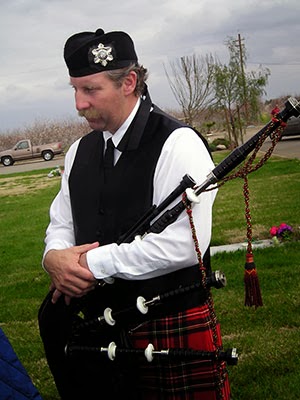 As a bagpiper, I play variety of gigs.

Recently I was asked by a minister to play at a graveside service for a homeless man. He had no family or friends.  All that was known about him is that he was a Scotsman.  He thought bagpipes would be an appropriate farewell. The congregation had covered his burial expenses, but asked if I would donate my services.

I said “I’d be honored to do this for a countryman.” and asked the pastor for directions.

I wasn’t familiar with the backwoods roads to the church, I got quite lost.

I finally arrived an hour late. The tiny church and it’s ancient graveyard were there but the minister had evidently gone and the hearse was nowhere in sight. A digger and its crew were the only ones left and they were eating lunch.

I felt badly for being late. I went to the side of the grave and looked down. The vault lid was in place. Some of the earth had already been shoveled into the hole. I didn’t know what else to do, so I started to play.

The workers put down their lunches and began to gather around. I played out my heart and soul for this man with no family and friends. I played like I’ve never played before for the homeless Scot.

As I played ’Amazing Grace,’ the workers began to weep. They wept, I wept; we all wept together.
When I finished I packed up my bagpipes and started for my car. Though my head hung low, my heart was full.

As I opened the door to my car, I heard one of the workers say, “I never seen nothin’ like that before and I’ve been putting in septic tanks for twenty years.”

Apparently, I was still lost!