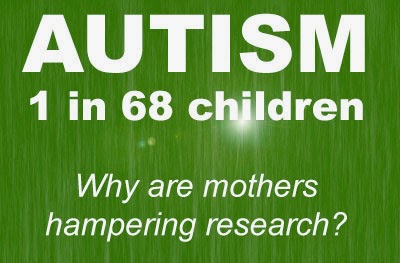 I'm about to say something very unpopular, but true.

Mothers of autistic children are partially to blame for lack of research funding.

Autism is Overwhelming and Under-Funded

Mothers are screaming, "Why?!"


Unfortunately, the same mothers are part of the problem. (Here's the part where it gets unpopular.)

First of all, realize that I'm using the term "mothers" to represent all people who have been affected by autism personally, partially for brevity and partially for effect.

Mothers are demanding answers, but not believing them.


Researchers have been searching for causes and cures to autism. Research is a long process by nature. Science must be tested repeatedly for verification. Science is difficult. The process for determining something as "true" requires many steps by many different scientists.

The public affected by autism is too emotionally driven, and it's hampering science.

Here are some examples:

Some scientists are looking for cause. Identifying the cause of any disease often relies on creating a hypothesis and disproving it, rather than proving it. Because of this everything from avocados to vaccines has been tested to determine if exposure prenatal, postnatal, or later in life, increases the likelihood of a child getting autism. When one of these things demonstrates a higher than average correlation, the hypothesis must be tested and retested by independent sources.

During this process it's reported that X may be linked to autism in a scientific journal. By its nature, peer-reviewed research invites lots of criticism of methodology. Additionally, multiple studies will be conducted on the same subject and often disapproving the link.

This is extremely common in the science community. It's the nature of science.

It took a long time to prove definitively that smoking directly increases your risk of getting lung cancer.

After science had proven it, the medical industry and government regulation adapted slowly and cigarette smoking has been dramatically reduced as has cigarette-related lung cancer.

Mothers of autistic children are unwilling to wait.


Because of the anticipation, research in its earliest stages often garners more attention than it deserves.

Preliminary research gets widely reported by news media. The more it's reported, the more its presumed as fact i.e. vaccines cause autism.

In fact, they don't. Vaccines cause major diseases to be eliminated. I'll say it again. There is no link between vaccines and autism. People who believe there is are basing this on one study that has been debunked. They are basing this on the general premise that all babies are vaccinated, and many of them get autism.

Unfortunately, a huge number of people still believe this myth.


The resulting pseudoscience hurts in two ways. Pressure on the medical industry and pressure on politics have actually caused the presence of reversing vaccine related regulation and practice. Most notably, a court case found in favor of a mother who sued. This was offered as proof. The only thing it proved is that one judge was swayed by the argument that vaccines cause autism.

Additionally it hurts because researchers are far less willing to publish findings for fear of inciting a new wave of social change.

Good scientists may withhold information in its early stages, slowing research. Bad scientists don't hold the same standards of truth, and are more likely to publish research even if they know it won't hold up to scrutiny.

An Example of Bad Science


Many things have changed about the way we care for babies. All of them should be researched, however, research isn't being done. Here are some examples.

Autism is on the rise, so something else that's increasing must cause autism… (reasonable, but faulty logic)

These are just a handful, plus we need to test combinations.

It's possible that wearing polyester fibers, consuming breastmilk, taking too many pictures and living in an area with more air pollution but less alcohol consumption has led to a dramatic increase in the number of autistic children born to white mothers with Jewish ancestry when they have a Latino grandparent.

It's possible, but the only way to prove it is to hypothesize, research, report and verify independently.

Unfortunately, if a researcher did discover that flash photography between the ages of eight months and 10 months is a possible link to autism, before it could be verified and tested it would be on every major news network.The results may include:


Six months later, five other scientists would prove that a faulty methodology was used in the original study and with improved methodology there is no correlation.

Unfortunately, this would never land on Facebook or CNN. Fox News would report it, while interviewing a former pastor turned politician who disregards all science because of the theory of evolution. Nikon and Canon would settle out of court to avoid five years of litigation.

Plus an entirely new group of mothers of autism claim that autism is normal, and being different isn't a disease and we should all embrace multiculturalism that includes the autistic spectrum.

It's evil and wrong that autism now affects one out of every 68 children. As a parent, I lived in fear for years, hyper-analyzing my own childrens' behavior for symptoms. I have many close friends whose children struggle with disabilities within the autism spectrum, and I want the best for them.

However, I urge everyone whom is affected (which is now more people than not) to let science do its work. Let them hypothesize and ultimately prove what causes, and hopefully what cures the most critical forms of autism.

Let teachers do their jobs. Give them the tools to help kids integrate into their classroom, and ultimately into society.

If we don't interrupt the research, we will see significant results. If we hamper research through irrational fear or by jumping to conclusion, it harms your children and ultimately mine as well.