Memorial Day – The True Cost of War is Staggering 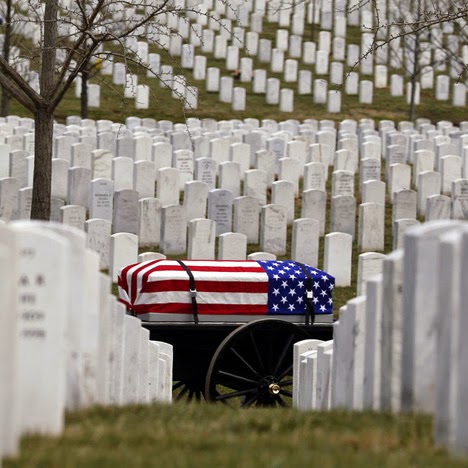 Scattered across Facebook today are photos of grandfathers who risked and sometimes lost their lives in wars of generations past. Taking nothing away from their sacrifice, I think there is an even greater sacrifice that we've all made.

The biggest toll of war isn't the grandfathers called away when they were young. Their children, grandchildren and great-grandchildren honor them and create their legacy.

But what of the nineteen-year-old man who saw the Army as a way to get off his farm? Who will honor the twenty-two-year-old who dropped out of medical school to serve their country? How many young men from Harlem, Brooklyn, the Back Bay or South Philly will be remembered today? All of them came home with a flag draped across their casket.

My grandfather's generation suffered the most in the War to End All Wars.

My father's generation lost men and women in Korea and Vietnam.

My generation was lucky in the sense that our squabbles, comparatively, had little loss of life, yet the losses from those who returned damaged physically and mentally are still yet to be realized.

Young men and women of honor lost their lives on foreign soil to protect our freedoms and the freedoms of others. They left in shades of gray and olive to return covered in red, white and blue.

The tragedy extends beyond.


These thousands of lives snuffed out early makes us sad. The real tragedy, however, isn't that they lost their lives trying to accomplish something great. The real tragedy is that they lost their lives before realizing their true potential.
This sheer volume of intellectual, physical, spiritual and artistic potential multiplied by the loss of future generations is staggering.


My great-grandfather survived the first world war. My grandfather served in the second world war in a support role of relative safety. My father was in college during Vietnam and thankfully wasn't called upon. By virtue of my disability, I wasn't deemed fit to attend the military Academy.

It's my hope that my son and my daughter and their peers won't be called into service in North Korea, Iran, Africa or even here at home, but if they were I feel they would answer the call with honor.

I was lucky. Had my great-grandfather been killed in Europe, none of the rest of us would exist today.

I don't know much about him. What I do know, however, is that had Raymond Tweed died there would be no photos of him in memorial on Facebook today. There would simply be a void where my family had never come into existence.

On this Memorial Day, I honor men and women with this simple prayer of thanks, and a simple request of forgiveness. They gave more than their lives.