The Hobby Lobby Decision, why it's right, why it's wrong, and what to do about it 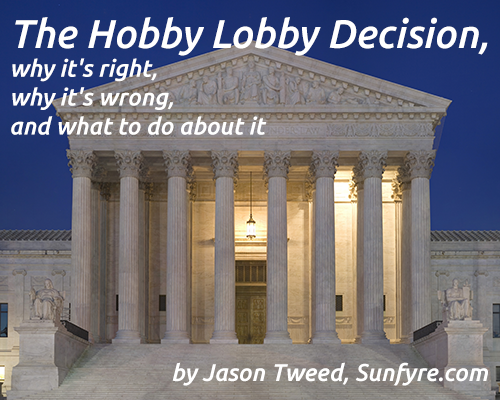 Generally speaking, I'm going to irritate just about everybody with this post, so get in line.

I'll begin by your irritating women, atheists, and Justice Ginsburg.


The Hobby Lobby decision was right.

The Hobby Lobby decision was right. By "right", I mean "correct". In America, companies do have rights based on their ownership. They are allowed to make value decisions and judgments, right or wrong, based on the owners' own values. Owners are liable for the decisions a company makes in some cases. Therefore, to force an owner to betray their core values is unconstitutional.

Realize, this doesn't apply to public companies. As an owner and a public company you can choose to own or not own stock based on a company's values. I'll never purchase tobacco company stock because I believe their core value system is fundamentally wrong. I do, however, own stock in other companies that I see as innovative and ethical. If one of these companies violates the law, I have the right to sell the stock, and I can't be held personally liable.


The Hobby Lobby decision was wrong.

The Hobby Lobby decision was wrong. By "wrong", I mean "dangerous" to the rights of other Americans.

Generally speaking, we believe in individual rights when they don't impose on overall civil rights. For example, you are allowed to dislike people of a different race. You are not, however, allowed to use that dislike to inhibit a group as a whole.

That may seem cut and dried, yet, civil rights or process. In the 1860s, it was legal to own other people. Abolition didn't create equal rights, it simply defined people as individuals rather than property universally.

It wasn't until the 1960s that this former group of slaves were given rights to equal education, equal access to public transportation, and equal rights to voter registration.

It wasn't until 1990 that people with disabilities gained to these rights. As a landowning white man, I've had the right to vote since the original Constitution yet it was over 200 years before it was required that polling places become wheelchair accessible.

As anyone in a wheelchair, anyone who speaks other than English, and anyone with dark skin knows that even with all these rights, "equal" is a very malleable idea.

In respect to Hobby Lobby, legally they have the right to impose (in a limited fashion) the moral code of the owners onto the behavior of the company, in this case not purchasing health insurance that covers contraception.

The Supreme Court of the United States had the opportunity to change the law. Four out of nine Justices in fact, voted to do just that. In a beautifully worded dissenting opinion written by Justice Ginsburg, she eloquently demonstrated why the law, as it is, is dangerous.

Now, it provides privately held companies more discriminatory rights. Gay marriage may be legal, but now there is a case to be made that companies whom are morally opposed to same-sex marriage may not be required to abide by all of the rules associated with legal marriage. Other companies have already chosen the other route. Some companies were granting spousal privileges, such as insurance benefits and hospital visitation, to partners who couldn't legally marry.

Let's separate the Hobby Lobby decision from Christianity. Actually, most Christians use birth control, so let's narrow it down to only Christians who believe that sex is for procreation exclusively.

Suddenly, this is not a Christian issue. Suddenly the issue is of Christians that hold an extreme belief. Personally, I'm a Christian, and I hang out with many Christian people and almost all of us like sex. Very few of us consider sex as exclusively procreative.

If that's the case, this means that any value could ultimately be claimed as "religious" in nature.


Suddenly we have an issue where virtually every behavior, or even individual characteristics, could violate a moral code.


So what do we do from here?

First, and many have brought this up, vote with your dollars. If you don't like the way a company does business, don't purchase from them. Generally, Hobby Lobby will likely overcome their religious fortitude if women stop shopping there in droves, or if they can't find enough employees to staff the registers. Capitalism has a way of convincing owners that morality is flexible. In this case, it could work to our advantage.

Boycotts, however, aren't a solution.

You see, there are some companies from which we must purchase products. Sometimes these are known monopolies such as utility companies. Other times, they are virtual monopolies, such as a grocery store chain that has a dominant presence. (A topic for another day is how Internet service providers are milking virtual monopolies.)

We can't effectively boycott every company.


Therefore, the law needs to change. But can it?

Absolutely! We need to encourage Congress and the Senate to build safeguards into this system of influence utilized by large privately held companies. Today there are many companies in the billions of dollars that are still not public. Additionally, some smaller public companies have managed to go private, or to sell off segments of their business to create new privately held enterprises.

We need to create a lie that establishes a dollar value for which a private company cannot impose its religious morality.


But, the Constitution is universal, correct? Once a right, forever a right, right?

No, there is precedent.

The Americans with Disabilities Act states that public places and places that receive public monies must be accessible. For this reason, Hobby Lobby or the U.S. Postal Service, must abide by accessibility rules.

However, the Americans with Disabilities Act also recognizes that making something accessible to a wheelchair user is not the same as granting access to other minority groups. Permitting black kids to go to school, and sit anywhere on the bus they choose, is easy. Retrofitting a school and putting a wheelchair lift on a school bus, however is expensive.

Therefore, the Americans with Disabilities Act was interpreted by the courts to make it more fair.

Companies below a certain number of employees (in this case, fifteen) are permitted to take disability into account during hiring. If your small company with a sales force of three believes that a wheelchair user would not be well received as a salesperson, you may elect not to hire him or her. (I don't like it, but it is, in fact, the law.)

Additionally, due to costs of physical accommodations, private businesses and even some public entities are permitted leniency when it comes to retrofitting for wheelchairs.

For example, there was a major case in Philadelphia. Cities aren't required to retrofit curb cuts, however, when they make sidewalk repairs on a particular block, they are required to add curb cuts.

As more sidewalk repairs occurred within major cities like Philadelphia, it meant navigating a zigzag course through the city, as each corner gradually became more accessible.

To avoid expense, Philadelphia repaved some major streets, but did not make changes to the sidewalk. A group of citizens sued, and it was determined that repaving streets was a large enough renovation that the sidewalks (including ones that had already been fitted with curb cuts) must become accessible. The repaving process had specifically excluded sidewalks to save money, yet the process of repaving damaged most of the existing curb cuts. The Court determined that sidewalk repairs or street repaving both warrant the inclusion of curb cuts. If this hadn't happened, accessibility would have decreased as curb cuts became damaged during repaving.

Wheelchair accessibility was required for public transportation, however private busing companies fought this, the largest of which, Greyhound, lobbied heavily to become an exception. Ultimately this privately held corporation was required to make buses accessible, however they were only required to purchase new buses with wheelchair lifts. They weren't required to retrofit buses. This may seem fair, however the average lifespan of a bus is more than thirty-five years. This means that most of the buses purchased between 1980 and 1990 are still in service. Furthermore, due to Greyhound lobbying, the first accessible buses weren't purchased until 1994. It will be another fifteen years at least until every Greyhound bus is accessible.

Was the Greyhound ruling unfair? In my mind, absolutely, however that's how the law was interpreted.

Had everyone in America been angry at Greyhound for excluding us, and spending millions on lobbyists to make it happen, we could've boycotted Greyhound. Had this happened, the company would've retrofitted every bus within six months. Boycotting Hobby Lobby isn't the answer to the ruling, but it certainly helps.

There you have it. The Supreme Court was correct, technically. They were also wrong, because they chose to start us down a potentially slippery slope. Finally, we can do something about it, individually and collectively by voting with our dollars and communicating with our legislature.

Meanwhile, I'm going to go to Michael's because they sell top quality craft supplies, and the company is run more in line with my view that sex is really awesome and has many uses other than to procreate.

I would call a taxi… but unfortunately, 99% aren't accessible. Baby steps.

People who died on the toilet (real people and fictional characters)

By Unknown Wednesday, June 28, 2017
New Anniversary Gifts Destined to become Traditional My wife and I have been married for 20 years today. Over the past 20 years I made efforts each year to observe the traditional anniversary gifts. Some of them are certainly more difficult than others, and many of them are hard to find gift worthy in the modern age.
Therefore, I offer you a modern take on anniversary gifts. How many of these will become traditional?
First Anniversary – The Ramen Noodle anniversary. Let’s face it, you blew $30,000 on the wedding, and your student loan debt hasn’t gone anywhere. Share a Cup O’ Noodles. Eat with chopsticks on the floor because you can’t yet afford a couch.
Second Anniversary – The Puppy Anniversary. She’s been looking at you with those eyes that say she wants to start a family, but you just bought a new couch. Get her a puppy instead.
Third Anniversary – The Kinky Lingerie Anniversary. Leather, silk or lace can re-fire the engines after a year of flannel pajamas that smell like the puppy,…
Post a Comment
Go! »

How United Airlines Should Have Handled the Situation

By Unknown Tuesday, April 11, 2017
United Airlines is under fire for a viral video that shows them removing a passenger forcibly from an airplane bound for Louisville Kentucky.
Here are the bullets:

The plane was already loaded and full.The airline needed to fly four employees to Louisville Kentucky on the plane. The employees needed to go to prevent another plane from departing late.The airline offered $800 in compensation to the first four people who would volunteer to give up their seats. No one took the offer.The airline went to a lottery, drawing for people at random. These four people were asked to leave the plane, and they would receive the compensation.One of the passengers refused to leave. It's unclear how things escalated, however he was removed by security officers. Reports are conflicting about whether the officers were police officers, TSA workers, or airline staff.The gentleman was literally physically dragged down the aisle receiving while screaming in protest and physically abused in the process.Ap…
Post a Comment
Go! »