By Unknown Thursday, September 11, 2014
Thirteen years ago my wife and I had to spend the last of our savings on fertility treatments. We'd spent a year and a half and $30,000 trying to get pregnant. Our last attempt, success or not, was in late August 2001. 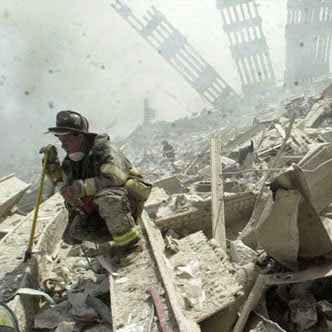 I remember sitting at my desk watching the twin towers burn and collapse on a Tuesday morning. I remember thinking that the world was changing minute by minute.

I was born in June 1970. With the exception of a three-day ground war in Kuwait, I lived in the most peaceful time in American history. Now that was changing. More Americans died in 90 minutes then had died in my lifetime in what I knew was just the beginning of war.

September 11 was terrifying to us in a very unique way. My wife and I had just given everything to try to bring a child into this world. We still had to wait several days to determine if she was pregnant.

Were we going to be parents? If so, where we bring a child into an uncertain world? Our suburban American life had shielded us from the hardships and struggles of most of the planet, with only quick snippets on the 11 PM news. We had seen heartache and suffering from far-off lands, but it still seems no more real than a television drama. But now, we'd seen American firefighters covered in dust, weeping. We'd seen stockbrokers, insurance agents, administrative assistants and janitorial crew jumping from buildings to escape smoke and flame preferring a quick death.

We knew this was just the beginning. Airplanes bombing a desert wasn't going to appease Americans. A generation of young men were donating blood at the Red Cross and then standing in line to enlist.

This was a new world. It was one I've never known.

A few days later we went to the doctor. An ultrasound revealed that in fact, our efforts have been rewarded twofold. We were having twins.

Days after despair we suddenly were overwhelmed with joy and hope. Our future wasn't any more certain, but our hope was alive.

As a look back I wonder if we would've made the same decisions. If the planes had hit days earlier, would we have still wanted to go through with the treatment. If we found out earlier that we were pregnant with our hope have turned to despair rather than despair to hope.

Looking back today with the benefit of hindsight, I know now that my children would be raised in a time of great unity rather than shrouded in fear. The terrorists lost the war. Their goal was to tear down America, and a strengthened us.

America is far from perfect. Our leadership is indecisive and splintered. Our economy is overwhelmed by consumerism and capitalist agendas. The Internet has amplified the voice of the vocal few sometimes drowning out the quiet many.

But we are united. We are less tolerant of hatred and inhumanity. We think more globally.

By and large we look for ways to cooperate rather than obliterate.

Today I'm sure that my children are growing up in a better world than I could have expected. It's an imperfect world, but evolving for the better.