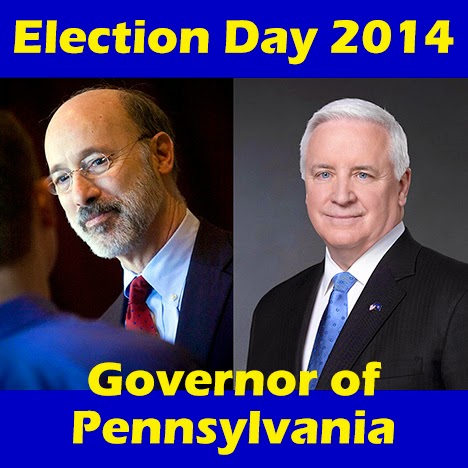 I'm very interested in politics and try to research facts, but I never tell people whom to vote for specifically.  I'm about to break that rule. Governor Tom Corbett﻿ has failed Pennsylvania.

-- He said he'd bring jobs, but PA ranks 47th in job growth. Nationally the economy is better, but in PA it has barely changed.
-- He said he would bring energy dollars with fracking. Of the 16 states that earn energy dollars, PA ranks last.
-- He said he would bring energy jobs, but almost all jobs created by energy companies were for high tech energy and geology engineers that they imported from other states.
-- He said casinos would lower property taxes, however property taxes have increased faster than property values. Expanding the casinos has simply taken income away from poor Pennsylvanians.
-- Speaking of poor Pennsylvanians, he vowed to save money in DPW. He did this by making it harder to get Medicaid, and other services such as Attendant Care.
-- Pennsylvania has always ranked in the top 5 as best place to live if you have a physical disability according to ADAPT. Today we rank 50th.
-- Governor Corbett never appointed anyone to the Governor's Office for people with disabilities, a sub-cabinet position. Later he dissolved the office altogether.
-- Governor Corbett promised jobs for Pennsylvania but he reduced jobs by exporting services. One DPW policy took jobs from 40 companies providing financial management services to people with disabilities and gave them to one company from Massachusetts.
-- Approximately 17,000 disabled people had their lives put at risk and approximately 80,000 high school educated workers had their pay delayed by 6 weeks because of a new DPW policy that forced us to switch services for attendant care, care we need.
-- He did this to reduce costs at DPW. It ended up costing taxpayers and Medicaid more.
-- He refused to comply with the Affordable Care Act (ObamaCare) which was popular, but cost PA much more. Later he quietly accepted ObamaCare.
-- He stood against gay marriage and abortion, again popular, but the Supreme Court disagrees and regardless of how moral it seems, he is powerless to do anything about it. It's all a show.
-- Governor Corbett is also a horrible leader. At least 8 cabinet level officials have resigned in the first 4 years. Additionally, when things didn't go his way he fired the top 5 people in DPW after the Secretary resigned to 'spend more time with family.'

I'm a Republican and voting today for Tom Wolf﻿. Here's why:

-- Tom Wolf was Treasurer of PA during a time of prosperity.
-- He was expected to run for Governor, but declined because his family business, which he had sold a few years earlier was near bankruptcy.
-- He bought the business back and saved 1500 PA jobs. Today the business thrives.
-- Democrats are seen as tax hungry and big spenders, but Tom has a track record of financial responsibility. He believes government should be run more like business, a very Republican way of thinking.
-- Tom is a fan of marriage equality. People think this means 'gay marriage' but it also impacts many people with disabilities. It means that services we receive aren't based on whether or not we are married.

Please join me in voting for Tom Wolf today!