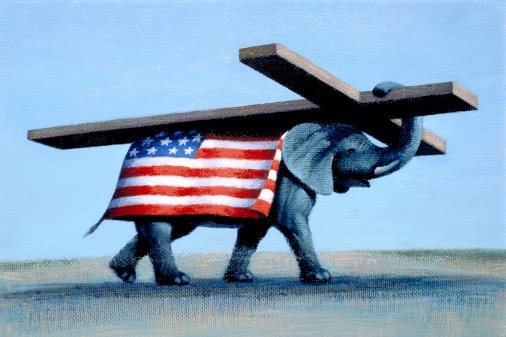 I just read an interesting article from Pew research on American religion. Since 2007 Americans are 4% less likely to attend religious services, 7% less likely to associate themselves with a particular religion, and 3% less likely to believe in God. This may not seem like big numbers, but each percentage point represents more than 3 million people.

My question is this. A small segment of Christians are extremely vocal and extremely fundamental. This group of Christians seems to have been embraced by the GOP, particularly since Pres. Obama's election. In the process, we've seen the Republicans shift so far right, and cater to ultraconservative denominations.


Many people, including myself, have left the Republican Party because of their determination to eliminate the separation of church and state. We left because they've thrown science under a bus, bolstering the distrust of science of creationists. (You can believe in a Creator and in the value of scientific discovery. Many do.)

Furthermore, far right political beliefs are now becoming embraced by conservative Christians, even though many of them conflict with core Christian beliefs.
Worse, many political platforms are based in the business success of corporate lobbying.

The Republican Party has condoned these extreme politicians because the voter base is loyal. They know they are causing apathy among voters, however, the apathy is taking place in the wide center, and extreme Republicans outnumber extreme Liberals. They win elections by reducing turn out, not through persuasion.

Most Christians are very centric in their political beliefs and many see caring for others as a Christian responsibility as well as a government responsibility.

A very vocal minority creates the perception that religious and political extremists are commonplace and tightly tied together, I believe that apathy and distrust toward politicians has spread to apathy and distrust for the deep roots that faith has built in this country.

At no point was this more clear as when the new Pope visited America. The Catholic Church has traditionally been more conservative than most Protestant Churches. However, politicians and extreme Evangelical Christians spoke out against the Pope because he is perceived as more tolerant of diversity and beliefs, embracing of science including climate change, and a proponent of reducing violence particularly between religious sects.

Correlation does not equal causation!


Naturally, extreme conservatives are going to draw the correlation between the time table of the Obama presidency and the fall in religious value.


While apathy in politics is increasing, and apathy in religion is increasing the most logical potential causation is where the two intersect. There is no doubt that extreme Christianity and extreme political conservatism distinctly overlap.

This doesn't equate to direct causation either. It's simply more likely.


While the Republican Party and the Christian faith are closely tied and both experiencing attrition, this attrition actually helps Republicans.

Few Christians however, can lead to overall declines in the importance of faith to our society and our nation. Apathy hinders the Churches.

I believe in God. I believe that most Christians are good people dedicated to the betterment of our communities and society. Those Christians are being dis-empowered unwittingly by a relationship with a group of politicos driven by thirst for power, greed and pride.