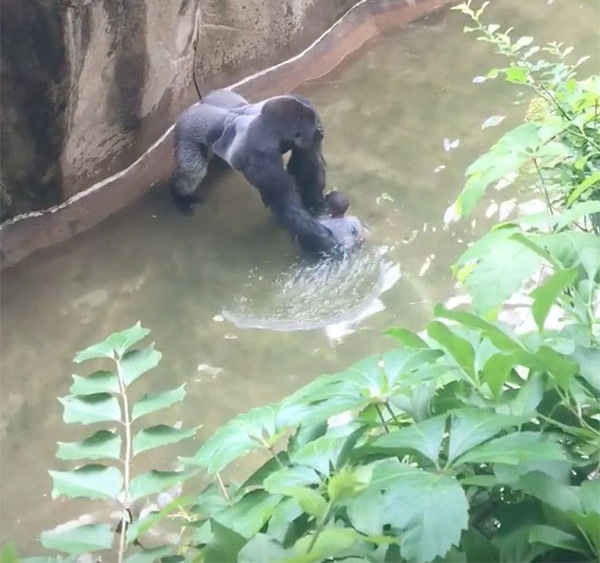 One of this week’s trending topics on Facebook and twitter was a tragic story. A small boy fell into the gorilla habitat at the Cincinnati Zoo. Minutes later the western lowlands gorilla, a critically endangered species, was shot and killed by zoo personnel.

A tragic story has been made even more tragic through misinformation and misguided opinion on social media.

I’m a father of 14-year-old twins, a boy and a girl. I don’t know a single father or mother that has never in their lives lost sight of their three-year-old. I compare it to a trip to Walmart. You’ll see a toddler screaming and a mother completely exasperated, and usually another child being completely ignored. Those of you without children stand in judgment. I know I did. “If that were my child I would…” I’ll let you complete the sentence in condescending judgment.

Parents, however, understand. We’ve all been there. Every child no matter how loved, well behaved, and never neglected has had a complete meltdown in public. Every child has also disappeared striking panic into their parents hearts, usually for less than 30 seconds, but feeling like an eternity.

The parents aren’t at fault. It was a bad situation that could’ve happened to any of us. In fact, the mother saw what happened and immediately called 911 for assistance. By all accounts she was there with multiple children, probably having a wonderful day. Distracted for 10 seconds, the curious three-year-old took advantage and went on an adventure.

Who agrees with me? Not the more than 500,000 people that signed an online petition requesting charges be brought in the death of the animal against the mother. However, the district attorney in Cincinnati and investigating police officers found absolutely no wrongdoing. Furthermore, witnesses also universally corroborated that the mother carried no-fault.

The zookeeper overreacted and killed the gorilla.

The zookeeper, whose name did not appear in any of the press briefings in my research, was very likely the best possible individual to make the decision.

I feel for this zookeeper, who probably has loved this gorilla and cared for him for years. However, the zookeeper also knew the capabilities of this animal. In fact, the gorilla is one of the most dangerous creatures in the zoo, and zoo personnel are not permitted in the habitat at the same time as the gorilla.

This was an impossible choice, and one the zookeeper will be living with for the remainder of their life. It is not for us to judge. We only can thank him or her for their service, and trust the decision they made.

The zoo was at fault.

The Cincinnati zoo is one of the top five in the country and recognized worldwide for excellence. The organizations’ dedication to protecting, conserving, and educating people about endangered species has been beyond reproach.

It was a tragic day at the zoo. However, the administration, facilities, and workers were not at fault. Not only do they follow best practices, in many cases they wrote the best practices.

Yes, the zoo will make some changes. In light of the publicity, they have to.

The district attorney also investigated the zoo and the personnel and found absolutely no fault or evidence to support criminal action.

The gorilla was protecting the boy.

Unfortunately, even the wisest people on social media accounts don’t know what was happening inside the brain of that gorilla. How do we know this? Because the people who worked with him every day didn’t know how he would react. The best experts in the world can’t predict how he would react.

This alpha male gorilla weighed 450 pounds. He was able to drag the child by one leg the way we would carry a damp towel, and with as much consideration.

This was a situation that in 17 years the gorilla had never experienced. It’s impossible to predict his ultimate reaction to the boy, or to anyone approaching while the boy was in his custody.

Regardless of the state of mind of the creature, there’s no doubt that the boy was in imminent danger.

The parents are out for a big payday.

Within minutes crowdfunding campaigns started for the child, the gorilla, and even funding for prosecuting criminals. Absolutely none of this was the doing of the parents.

In fact, in their first public statement, the parents said they had no need for any charitable donations and encouraged anyone whom felt the need to give to the Cincinnati zoo.

The parents are thankful for the outcome, but I’m sure are saddened. They don’t blame the zoo, and they have actively supported them throughout this process.

Lastly, we don’t need Donald Trump to prove racism is still prevalent on the web.

I was blown away at the outright evil I saw. The number of comments with racial undertones or blatant bigotry was massive. It made me ashamed to be an American. This three-year-old boy with a beautiful brown complexion became an instant poster child for bigotry, particularly the stereotype that somehow black parents are less capable.

There are a huge number of factors that contributed to this tragic event. An amazing number of people made a judgment simply based on the color of a child’s skin, and for that they should be ashamed.

Social media can be a powerful tool or a destructive force. It’s easy to presume, but I encourage all of you to embrace and understand the collective power you have. Yes, make yourself heard, but remember to do so after thoughtful research and true understanding. Sometimes that’s not possible, so as in this case, the best response is silence.