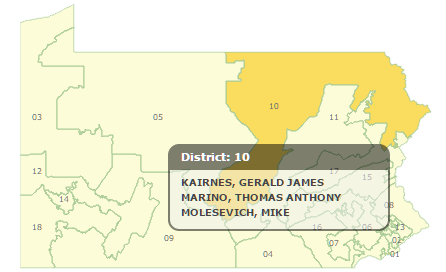 The 10th District Congressman Tom Marino received $524,205 in PAC money this election cycle, but less than 12% of that was from Pennsylvania organizations. Does this mean he's 12% loyal to Pennsylvanians?

In case you're wondering, neither of his challengers accepted any money from PACs. (Democrat Mike Molesevich and Independent Jerry Kairnes)

He took $4000 from Scalise for Congress; Steve Scalise that was outed for fundraising at a white supremacy hate group. (Which may explain Marino's early affinity for Trump.)

Frankly, the GOP doesn't even support Marino financially. His own party only contributed $250.

Thank goodness he's been promising us jobs in the energy sector. (Are these coming soon? Because Scranton-Wilkes-Barre and Williamsport are #2 and #3 for the highest unemployment in the state, 2% above the national average. Mining and logging have declined 24% in the past 12 months.)

Lastly, on his three big issues, he's accomplished exactly zero. Net neutrality is stronger than ever. The Susquehanna River is one of the most endangered, yet energy jobs are down. Healthcare and pharmaceutical costs have skyrocketed, pushing health insurance up 25% in spite of the ACA.

Congressman Marino would be considered a sellout, but frankly he hasn't sold anything other than empty promises and bad ideas.

He is a likable man, and many of his constituents will tell you that the people in his office are very friendly and helpful. But that's their job.

Congressman Marino is an elected leader. His job is to solve problems at the national level while representing the interest of people in the 10th District of Pennsylvania. His job is to create solutions, but on three separate occasions, he was on the wrong side. He has become the mouthpiece for lobbyists, not an advocate on behalf of the small businesses and hard-working families he is supposed to represent.

I don't know Mike Molesevich very well. He came onto the ballot late, and was outspent by Marino by nearly 20 to 1. He has a great reputation as a business leader and community member in Lewisburg Pennsylvania, but few outside know much about him.

I consider Jerry Kairnes a friend, and he is thoughtful and intelligent. He is no longer campaigning, so I'm following his lead in supporting Mike Molesevich.

Please remember, Pennsylvanians, there are many more elections than the presidency. The men and women who represent us in Congress, the Senate, and in the Pennsylvania legislature have far more influence on our daily life and our personal economies. Educate yourself about those that claim they represent you.