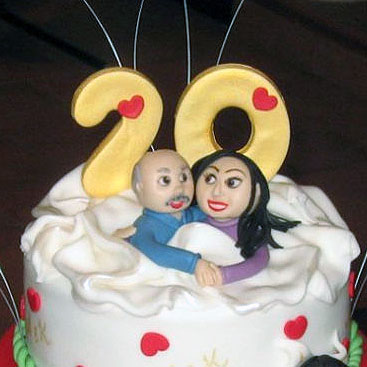 My wife and I have been married for 20 years today. Over the past 20 years I made efforts each year to observe the traditional anniversary gifts. Some of them are certainly more difficult than others, and many of them are hard to find gift worthy in the modern age.

Therefore, I offer you a modern take on anniversary gifts. How many of these will become traditional?

First Anniversary – The Ramen Noodle anniversary. Let’s face it, you blew $30,000 on the wedding, and your student loan debt hasn’t gone anywhere. Share a Cup O’ Noodles. Eat with chopsticks on the floor because you can’t yet afford a couch.

Second Anniversary – The Puppy Anniversary. She’s been looking at you with those eyes that say she wants to start a family, but you just bought a new couch. Get her a puppy instead.

Third Anniversary – The Kinky Lingerie Anniversary. Leather, silk or lace can re-fire the engines after a year of flannel pajamas that smell like the puppy, who is now 90 pounds of drool.

Fourth Anniversary – The Diaper Genie Anniversary. So the puppy only worked for a while, and now you are stepping over more gear than you ever owned in your life. Something smells in the closet.

Fifth Anniversary – The Home Depot Anniversary. So your growing family finally bought a house. Trust me, it’s a fixer upper! This gift card is good for mulch, crown molding, or weed-whacker.

Sixth Anniversary – The Toddler Bed Anniversary. So the little jerk learned how to get out of his crib and climb into bed with you. You use the “big boy bed” bribery technique to try to get enough time to find your way past her flannel pajamas and convince her that her hips are the same size as before the baby.

Seventh Anniversary – The Fidget Spinner Anniversary. So, the toddler bed worked and now she’s knocked up again. Your sex life is over and you need something to do with your hands.

Ninth Anniversary – The Man Cave Anniversary. Student loans are paid off. It’s time to let him spend a few dollars on himself. Let him decorate just one room of the house. It doesn’t have to be an actual room; the garage, the basement corner next to the water heater, if he’s lucky, a shed.

10th Anniversary – The Matching Tattoo Anniversary. It’s been 10 years. Until now you weren't ready to commit, you know, with something permanent like a tattoo, but what the hell.

11th Anniversary – The In-laws Anniversary. You’re sick of the kids but they aren’t old enough to leave at home so you drop them with grandma and grandpa and go apple picking or to Amish country. The only bad part was the night you picked up the kids and slept in his old room which creepily hasn’t been redecorated since he was 12.

12th Anniversary – The Minivan Anniversary. With a newborn baby (who would’ve figured that night in his old bedroom…) It’s time to get something more practical than a pickup and a Prius. Plus, soccer moms are the new sexy.

13th Anniversary – The Sports Car Anniversary. He turned 40. It’s either this or call the college roommate from anniversary #8.

14th Anniversary – The Riding Mower Anniversary. He bought it for you, but if you pretend you like it, he will still keep mowing the grass. Key phrase: “How thoughtful, a couple gift”.

15th Anniversary – The Birthstone Anniversary. So he finally buys you jewelry, a beautiful garnet ring. Granted, your birthday is in March, but just let it go.

16th Anniversary – The It-Happens-to-All-Guys Anniversary. Get him the free sample of the little blue pill. Tell him it’s not that there’s anything wrong, it’s just to spice things up. Don’t worry, he will renew the prescription on his own.

17th Anniversary – The Grocery Store Flowers Anniversary. Yes, he forgot. Yes, your text was subtle. Yes, he still didn’t get it until you gave him the card. Yes, he certainly did need bacon at 10:30 PM and brought you flowers.

18th Anniversary – The I’m Sorry I Forgot Last Year Anniversary. This is where you get some serious jewelry. You can drop hints for a month, but trust me, he remembered last year sleeping in the man cave with some crappy grocery store flowers and a packet of raw bacon. You’re getting several pieces of fine jewelry and a gift receipt just in case.

19th Anniversary – The 529 Fund Anniversary. The firstborn might get a basketball scholarship. The smart one will get a full ride, but thinks she might go straight to law school. The little one, let’s just say we’re going to need to start saving for community college or bail money. Either way, we better start socking away every penny.

20th Anniversary – The New York City Getaway. You get Broadway tickets and a midpriced hotel near Central Park. The kids stayed home alone. You know the little one will keep the teenagers in line. You visit art museums and ride in the handsome cab. You eat some amazing food then fall asleep in each other’s arms around midnight. You’re not ready to go back to your old life quite yet, but ultimately have no regrets.

Happy 20th Anniversary, Honey. Let’s get our tattoos touched up.